Google Maps always shows you the shortest and quickest way to reach your destination.

It always works on customer satisfactory features. A few months ago it brought the bike-mode feature that shows you the backways of the street to avoid traffic. 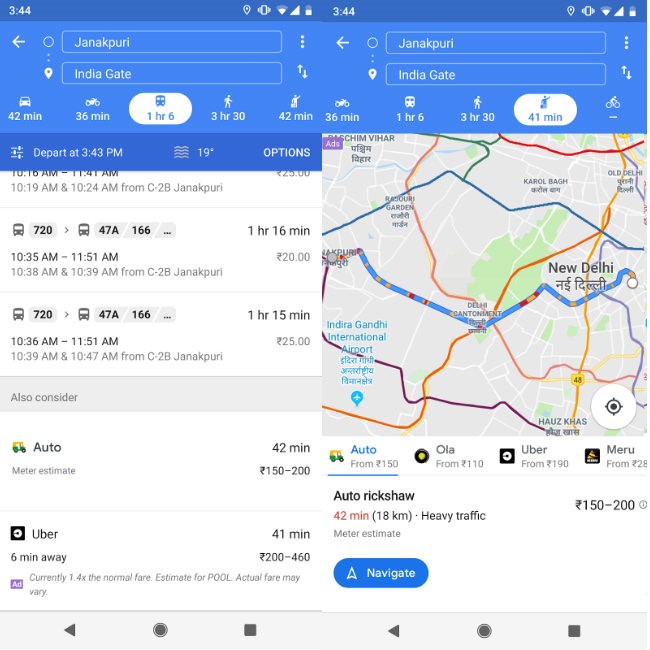 Now it has introduced the auto-rickshaw as a new public transport to its Google Maps app on Android devices.

This feature initially works for the Delhi users and latter will be available for all Android users.

By using this feature, the traveler will be able to see the suggested routes as well as the estimated auto-rickshaw fares in the Google Maps.

According to the tech giant Google, this feature will be easier for people to plan their journey by giving an estimate.

Because Currently, for an unfamiliar journey, commuters often overpay and don’t have an idea about the distance or best route.

To enjoy this latest feature of Google map, you have to update your Google Maps app to latest v10.6.

After updating Google Maps, you can find the latest feature in the “Public transport” and in “cab” mode.

A commuter can able to see the result for the auto-rickshaw mode in the ‘Also consider’ section.

The expected journey route and the official fare model are based on the information shared by the Delhi Traffic Police.

Once the commuters choose the auto-rickshaw as their desired mode of transport, they will be able to see the traffic routes information and the estimated price for their journey.

To start the journey, they simply need to tap ‘Navigate’. The same option can also be accessed through the “cab” mode on Google Maps.

The feature will also help the users plan their journey better, so they could look at the expected cost of the auto-rickshaw ride and decide whether they want to take it all the way, or perhaps take a different mode of transport instead,” said Vishal Dutta, Product Manager, Google Maps.